Serving the Central Oregon Coast since 1959

Free, over-the-air television in the Florence area began back in 1959 with a demonstration of the capabilities of translator technology, described in this clipping from The Siuslaw Oar: 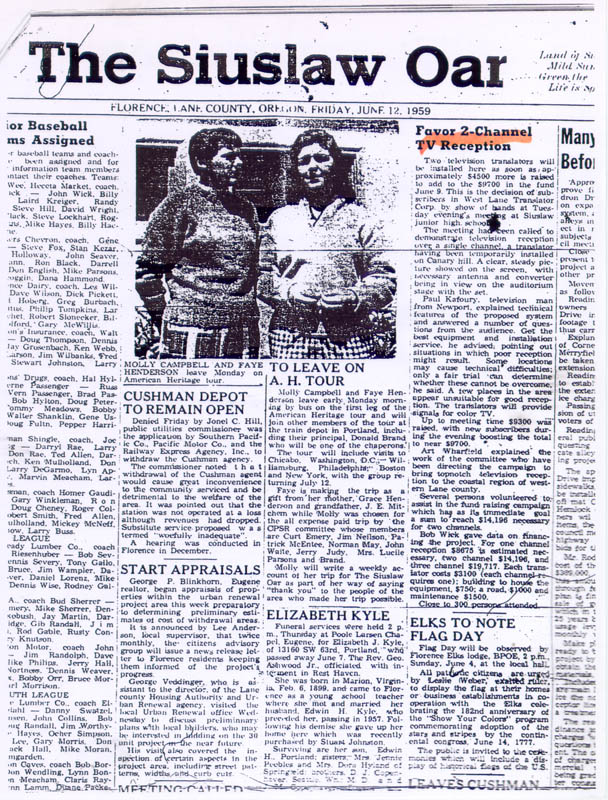 Two television translators will be installed here as soon as approximately $4500 more is raised to add to the $9700 in the fund June 9. This is the decision of subscribers in West Lane Translator Corp. by show of hands at Tuesday evening’s meeting at Siuslaw junior high school.

The meeting had been called to demonstrate television reception over a single channel, a translator having been temporarily installed on Canary Hill. A clear, steady picture showed on the screen, with necessary antenna and converter being in view on the auditorium stage with the set.

Paul Kafoury, television man from Newport, explained technical features of the proposed system and answered questions from the audience. Get the best equipment and installation service he advised, pointing out situations in which poor reception might result. Some locations may cause technical difficulties, only a fair trial can determine whether these cannot be overcome, he said. A few places in the area appear to be unsuitable for good reception. The translators will provide signals for color TV.

Up to the meeting time, $9300 was raised, with new subscribers during the evening boosting the total to $9700.

Art Wharfield explained the work of the committee who have been directing the campaign to bring topnotch television reception to the coastal region of western Lane county.

Several persons volunteered to assist in the fund raising campaign which has as its immediate goal a sum to reach $14,196 necessary for two channels.

More recently, the switch from analog to digital TV transmission was another big step forward for our organization, featured in this article in The Siuslaw News:

Florence television viewers this week were greeted to new digital channels broadcasted by West Lane Translator (WLT), which successfully converted its free “over-the-air” TV services after a month of delays.

As of Wednesday, the local nonprofit organization’s four licensed stations — ABC, CBS, NBC and FOX — and OPB transitioned from analog to digital signals, improving audio and visual quality for viewers.

“The transition to digital for this area might not have happened if we had sat back,” said Bill Durst, WLT board member. “In some communities, broadcasters lacking local support are considering turning off the old signal rather than fund digital. Those communities risk going without free television.”

“Our mission is promotion of free broadcasting for the community — in a tradition of 50 years of effort — and we believe we will accomplish this,” he added.

“We also want to thank new community member supporters who have voluntarily sent in annual or life-time dues.”

Stormy conditions last month prevented installation of the 12-panel antenna system, which was essential for the digital switch.

“The delays were unfortunate,” Durst said, “We had to take some risk here, both in obtaining this tower and in deciding to buy equipment.”

WLT will continue to broadcast channels 52, 54, 56, 58 and 60 in analog until the end of January. Once these signals are turned off, however, older non-digital TV sets will require a converter box to get reception.

Both articles on this page appear courtesy of The Siuslaw News.